John’s Journal: A Perfect Night In A Perfect Place

Normalcy Returns For Minneota and MACCRAY 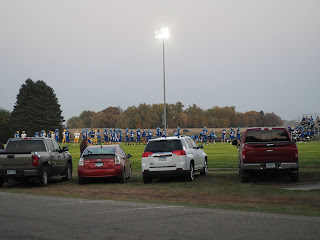 MAYNARD – Rick Meyer might have been the happiest football coach in Minnesota on Friday night, despite the fact that his MACCRAY Wolverines dropped their season opener to the visiting Vikings from Minneota.

After a spring, summer and early fall of ups, downs, too many questions and too few answers, Meyer was back doing what he loves: coaching kids. He’s also an assistant track and field coach for the Wolverines’ girls and boys teams; they had no season last spring when all sports were shut down because of Covid-19.

“I haven't been an active participant in a sporting event in almost a year,” Meyer said after Minneota’s 47-6 win. “And so it felt good to get back out here.”

Everything was perfect Friday night in this small town (population 366) in southwestern Minnesota. As Covid-19 has taken a hammer to every aspect of life, it was awful nice to see this return to normalcy: High school kids competing with their friends, their families cheering them on as the sun set behind blazing colors on the trees. Beyond the trees were beaming lights atop a string of grain elevators that are buzzing at all hours as farmers bring in trucks and wagons bulging with corn and soybeans.

During harvest time, traffic jams on country roads are a part of everyday life as slow-rolling machines make their journeys. If some of the busy folks driving those vehicles were lucky enough to get away for a couple hours of football on Friday, it was worth it. Because it was normal.

“Everything's been so different,” said Minneota coach Chad Johnston. “And it wasn't until you stepped onto the field and you're like, ‘Hey, we're playing. This is a football game.’ It was good to be out here. It was fun to be out here.”

The game was the same, and that says a lot because other things are not the same. Minneota had 36 players in uniform; four took the bus for the 48-mile trip and the other 32 rode with parents. That’s the norm for lots of teams in lots of sports this fall, and probably will remain routine for winter sports; it’s a way to limit exposure in tight spaces. 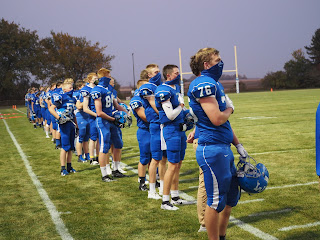 Crowds are limited to 250 for outdoor events, so MACCRAY (which stands for the three communities in the school district: Maynard, Clara City and Raymond) received 150 tickets and Minneota 100. The hometown fans used 135 tickets and 96 people came from Minneota. A table was set up at the entrance to the field, where lists of people who had received tickets were kept. No ticket, no luck.

When the ambulance from the Maynard Fire Department came through the gate, MACCRAY activities director Jim Trulock said, “Hope we don’t need you but thanks for coming.” They were thankfully not needed.

The field was magnificent, as fine a grass surface as you will see at any high school. The grounds crew -- Scott VanHeuveln and Matt Tebben -- had been preparing the turf for days in anticipation of the season debut, and the grass was mowed for the final time at 2:30 Friday afternoon.

During introduction of the starting lineups the Wolverines exhibited high levels of ability in non-contact, leaping shoulder pad bumps. The end of the night was much like the beginning; after Meyer finished his postgame remarks to the group in the east end zone, the boys each raised a hand in the traditional “1-2-3 team!” effort but remained separated. 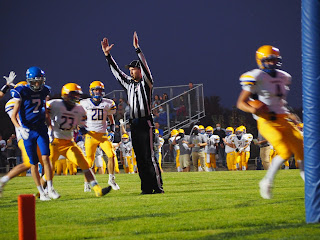 In normal times, the three weeks of preseason football preparation includes a Saturday scrimmage in which four teams are involved, rotating through so each team sees three opponents. There were no scrimmages in this disjointed autumn.

“Not having a scrimmage, we really didn't do a lot of hitting,” Meyer said. “And so we were not certain what it was going to look like tonight. And that hurt us.”

Johnston echoed those feelings of uncertainty.

“It's been so weird,” he said. “Practices were structured differently going into this game. You haven't really scrimmaged and you really haven't seen anybody, you don't know what your kids are capable of doing. So yeah, I think there was a lot of question marks going into tonight.”

The Minneota school district has faced Covid-19 issues this year, with classes starting late and beginning with distance learning. Fingers are crossed that everything remains under control. Minneota is in Lyon County, which includes Marshall and Southwest Minnesota State University. An August wedding in Ghent, which is five miles from Minneota, was linked to 75 cases of Covid-19.

“We've been right on the line, we've been borderline,” Johnston said. “We're doing a close count in our county of what's in Minneota, what's in Marshall and what's at SMSU. Our school’s really doing everything they can to stay open, especially now with sports going on and everything else. But you’ve got to talk to kids, ‘You guys have got to understand. If one or two kids get this, we could be done.’ We have to take precautions to make sure that we are not hurting ourselves.”

Normal football seasons entail eight regular-season contests and possibly six more in the postseason for teams that reach state championship games. This fall the regular season is six games long and section championships will be the end of the postseason.

“It's frustrating,” Johnston said. “But we've tried to tell our kids, once again, that they've been gifted a season. Our prize is whatever the biggest prize is going to be. If it's a section final at least you could say, ‘Hey, we would have been the team that represented at state.’ We're not getting that, but we're still shooting for that undefeated season, and it's not going to be easy. We're shooting for potentially a section championship and that's our trophy.

As the teams and fans departed the field Friday night, there was a definite feeling of absolute, pure, utter normalcy. The kids had played, the coaches had coached, the officials had worked hard and well, and the fans had cheered. That’s just how it’s supposed to be.

Meyer thought back to recent weeks when big news arrived, saying, “When they announced we were going to play football, you could hear cheering in the whole school.”

“Everything's been so different. And it wasn't until you stepped onto the field and you're like, ‘Hey, we're playing. This is a football game.’ It was good to be out here. It was fun to be out here.”
Minneota coach Chad Johnston