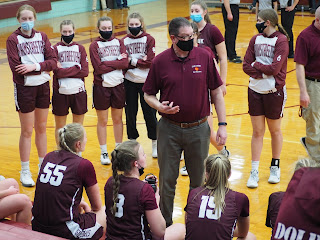 SAUK CENTRE – On Feb. 24, Scott Bergman was explaining during a phone call how it would feel the next time the Sauk Centre girls basketball team he coaches lost a home game. He said, “Our mentality is if a team comes to our place and beats us, they’re going to have to earn it. Then you tip your hat and go on to the next game.”

The hat has been tipped, the next game is coming up and the Sauk Centre Mainstreeters – past and present -- can look back with pride at one of the most remarkable streaks for any team anywhere.

The Menahga Lady Braves made the 90-minute drive south to Sauk Centre for a Saturday night game that had been finalized only three days earlier amidst a season and schedules that have been disrupted by the Covid-19 virus. And the visitors did what no visitors had done since Jan. 8, 2013: they beat the Mainstreeters in their own gym.

On that day in 2013, Osakis won 49-40. Ten days later Sauk Centre defeated visiting Melrose 73-47 and absolutely not one soul knew what had been started.

The Mainstreeters simply kept winning home games. Year after year, nobody came to town and won. As the teams tipped off Saturday night, the streak was 99 consecutive home victories over more than eight years and triple figures was on the horizon.

Sauk Centre has held the state record since the streak reached 77. Rochester Lourdes won 76 home games in a row between January 1989 and December 1996, followed by Braham with 74 from January 2009 to January 2015. The boys basketball state record for consecutive home wins is 85 by Braham from Feb. 2009 to Feb. 2016. (Boys and girls state basketball records can be found here: http://www.info-link.net/~mattnet/)

When Bergman was commenting about tipping the hat to whoever came to town and won, the next home game was scheduled for March 2 vs. BOLD. But the Warriors had to cancel due to virus issues and Bergman (also the school’s athletic director) began looking for another opponent. Menahga, having also lost an opponent in the same week, agreed.

Before everything was locked in, Lady Braves coach Cody Pulju asked some of his players if they wanted to go to Sauk Centre. He himself wasn’t sure.

“I honestly didn't want to really come here tonight because I know what Sauk Center is about,” he said after Saturday’s game. “Wednesday night I sent a text message to four of our leaders on our team. I said, ‘What do you guys want to do?’ I told them I didn’t want to take an opportunity away from them and they said they're all in, they wanted to come here.”

Menahga played in the Class 1A state tournament in 2018 and 2019, so they know about success. The Lady Braves on the bench and a small cluster of fans cheered mightily throughout the game, in which Menahga never trailed. 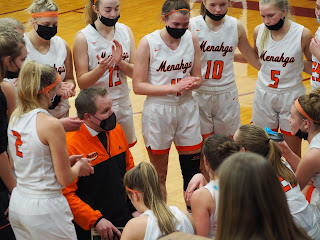 Asked about the significance of the victory, Pulju said, “Honestly in the locker room I just told the girls that we made it to state two years in a row, we've had some huge wins. And this is up there. They haven't lost on this court since 2013, and these girls came out and battled and this is just a huge win for our program and this group of girls. For this group it’s by far the biggest win of their lives.”

It was Parents Night for the Mainstreeters, with players presenting moms and dads with gift bags in a sweet pregame ceremony. Senior Michaela Dammann was also recognized for recently reaching the 1,000-point milestone.

The gym was built in 1964 and has all the classic charm you would expect. Fifteen rows of seats on either side of the court, the school colors of maroon and white on the seats and walls. A banner lists the school’s team state champs: Baseball in 1982, boys golf in 1983, 1986, 1987, 1988, and girls basketball in 2018. The Streeters have gone to state in girls basketball nine times since 2010, winning the Class 2A crown in 2018; they also were at state last year when the tournament was shut down after two days because of the virus.

When the game began the Lady Braves played what can be termed Octopus Defense; each defender appeared to have eight arms that constantly swatted at the ball whether it was being held, dribbled or passed. Lela Peterson, a 5-foot-7 junior guard, was particularly troublesome to Sauk’s offense while the Braves disrupted the Mainstreeters for the entire 36 minutes, holding them to their lowest point total of the season and 19 points below their average output. 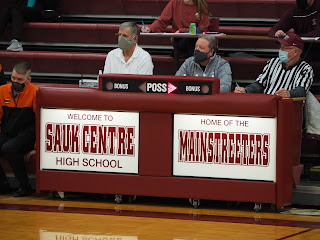 After a 27-21 halftime lead by Menahga, Sauk Centre’s Maddie Nelson hit a three-point shot, then sank two free throws on the next possession. That made the score 30-30 and the Streeters looked ready to make a run. But Menahga never let it happen. Their defense, combined with misfires by the Streeters, remained the theme until the end.

Menahga led 42-37 with 1:51 remaining. As the teams came out of timeout huddles, a group of Streeter students chanted, “Here We Go Streeters! Here We Go!” But where was no place to go because the Lady Braves proved adept at killing the clock.

And that’s how the streak ended. A few minutes after 8 o’clock on a lovely central Minnesota Saturday night, the visitors did what no visitors had done for about as long as most folks could remember.

The previous night, the Streeters had lost in overtime at Belgrade-Brooten-Elrosa for their first loss of the season after 13 wins. But there were no excuses to be found.

“That’s a good team,” Bergman said of the Lady Braves (10-3). “You know, we had a tough one last night, too. Playing back to back, we like to think it gets you ready for playoffs but it went the wrong way for us both nights. But you’ve got to turn the page and hopefully get better.”

The Mainstreeters were going to spend some more time together Saturday night, enjoying pizza and each other’s company and reflecting on what has been accomplished.

“We’ll kind of hang out for a bit and make sure they're OK because, you know, it was a tough, tough couple nights,” said Bergman. “But man, it's not time to feel sorry for ourselves because we got Albany coming in on Monday.”

Yes, Albany is coming to town. The Huskies are 14-1 and a big rival for the Mainstreeters.

As always, the next challenge awaits.

“I honestly didn't want to really come here tonight because I know what Sauk Center is about. Wednesday night I sent a text message to four of our leaders on our team. I said, ‘What do you guys want to do?’ I told them I didn’t want to take an opportunity away from them and they said they're all in, they wanted to come here.”
Menahga coach Cody Pulji