It’s All Different, But Soccer Teams are Thrilled to be Playing

CHASKA – After socially-distanced warmups, playing the first half, and then sitting on the grass for socially-distanced advice from coach Steve Vuolo at halftime, the Chaska High School girls soccer players were back on their feet, stretching out for the second half of Thursday’s season-opening game with Bloomington Kennedy.

Before everybody went to their spots on the field and the socially-distanced bench, Vuolo wanted to gather the Hawks together for one final word. He said, “Bring it in … kind of.”

That was as fine a summary of high school activities under Covid-19 as we will see. In a normal season, the coach would have said “bring it in” and the athletes would have gathered in a tight circle. But this is an autumn without huddles, high-fives or celebrations centered on hugs. Coaches, captains and officials stand six feet apart during pregame meetings. Postgame handshake lines have been replaced by teams saluting each other with waves. Spectators for outdoor events are limited to 250 under policies from the state of Minnesota – some schools and conferences are using even tighter rules -- and concession stands are either closed or serving only pre-packaged items.

“This is all different and you’ve got to think about it a little bit differently,” Vuolo said after Chaska’s 4-0 victory. “We just feel so blessed that we're able to play. And we don't want to do something that doesn't make sense and ruin that for everybody. We have 14 seniors on our roster, so this is so important for them.”

Indeed, after the cancellation of spring sports earlier this year, safety is the top priority for the fall sports that are being played: soccer, cross-country, girls tennis and girls swimming and diving.

Soccer is certainly a sport that involves contact, with players sliding into each other and goalkeepers and opposing players crashing together. Soccer balls are sanitized before and after games as well as at halftime. Players and officials can wear medical gloves if they wish. Goalkeepers are asked to refrain from spitting on their gloves.

Carter Lansdale, senior keeper on the Kennedy boys team (which lost a 2-1 decision to Chaska after the girls game), called the no-spit glove guidance “a huge adjustment,” but he substitutes hand sanitizer for saliva.

As the boys teams warmed up, Kennedy coach Dan Bushendorf walked around the field with a bottle of hand sanitizer in one hand, ready to squirt.

“We're doing everything we can,” he said. “We're literally doing all the protocols and guidelines; spraying, disinfecting like we're really crazy about it. I just figured why not? We have it, let's use it.”

At halftime of the girls game, Chaska medical trainer Morgan Derloshon used cleaner to scrub the table on which injured athletes sat as Vuolo directed his players to gather by saying, “Over here, masks on.” Music played on the public-address system – “Cotton Eye Joe,” “Old Time Rock n Roll,” “The Lion Sleeps Tonight.”

After the girls game ended, spectators were required to leave the stadium between games; they could re-enter for the boys game. Chaska and Kennedy are members of the Metro West Conference, which is using a pass system for spectators. Fans are required to wear masks when entering and they are recommended once people are seated. Lawn chairs are encouraged for social distancing. 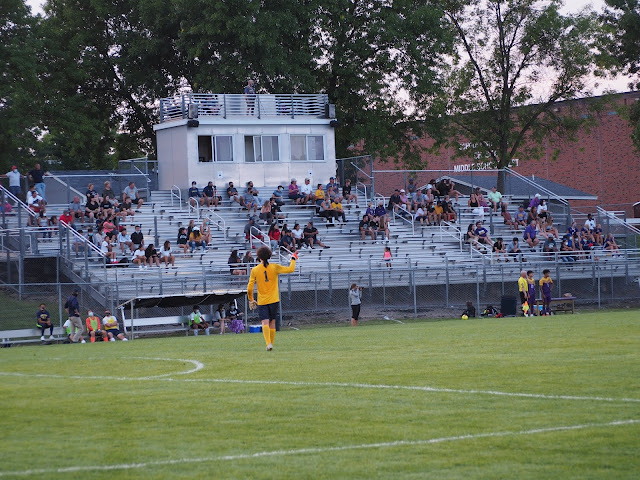 “It was a lot of work from the get-go just trying to make sure we do all the things that everyone wants us to do to keep kids safe,” said Chaska activities director Jon Summer. “I think the pre-planning was the bigger deal. I mean honestly, walking into the stadium tonight it was special. It had been 172 days since I was at an athletic event and for 19 years of my life that's what I've been doing. It almost feels like you're missing this piece of your life and I said to my wife this morning how excited I was to just be out here and see kids compete and represent our community.”

As for fans, Summer said, “We're certainly trusting them a little bit. We're managing the capacity piece up front and then we've tried to do a good job of communicating within our conference and in our community what the expectations are when you're here, masking and distancing and things like that.”

When the soccer season was given the OK to play, nobody was happier than the class of 2021.

“I think all of us were super excited to just have a season in the first place,” said Chaska senior Kaylee Van Eps.

Classmate and teammate Lillian Esping added, “I was ecstatic. Not only for myself to be able to play my senior season but for my fellow seniors and then for the program. It's just awesome.”

The season-opening games between Kennedy and Chaska were well-played and competitive. After the boys game, the teams waved to each other and exited the stadium, as did the spectators. Everyone seemed content.

“I found just even in conversations with people in our own community as we tried to get through this, there's a lot of grace right now,” Summer said. “They understand that people are trying to make this work and do all the things that we're doing to keep kids safe. And with that comes some sacrifices, but in the end, people got to come here and watch kids and communities compete.”

A Positive Message From A Soccer Official