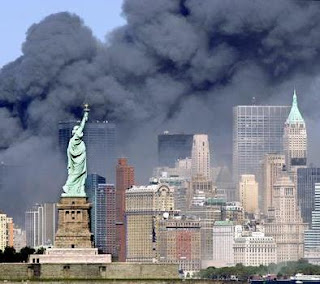 I’ll always remember where I was on the morning of Sept. 11, 2001. I had an appointment to speak to a class at Bloomington Jefferson High School, and I turned on the radio at home as I was getting dressed for the day.

There was talk of something bad happening in New York City. I turned on the TV in the kitchen and saw a big black smoldering hole in the side of one of the twin towers of the World Trade Center. A plane had apparently struck the building, but nobody knew anything more than that. Before long another aircraft blasted into the other twin tower.

I drove to Bloomington Jefferson, arriving a few minutes early. I listened to the radio in the car for as long as I could and then walked into the school and was escorted to the room where the Sports Literature class was meeting. There were televisions in the classrooms, but because of construction work in the school none of the TVs were working. I told the class everything I had learned from listening to the radio, and then we were all in blackout mode.

After the class period ended, I drove to the Star Tribune building in downtown Minneapolis. Like everyone else in the newsroom, I watched the scenes on television. The Pentagon was on fire … a plane had apparently gone down in Pennsylvania.

Fast-forward a few years and I was back at Jefferson, writing about a memorial stone that had been installed at the school in honor of former Jaguars quarterback Tom Burnett, who died when Flight 93 crashed in Pennsylvania. I also wrote about former Blake linebacker Gordy Aamoth, who died in one of the twin towers on Sept. 11. The stadium at Blake now bears his name and a twisted beam from the World Trade Center is on display at the stadium.

In the Sept. 14, 2001, edition of the Star Tribune, I wrote a column under the headline “High school sports can help the healing.” I had spoken with people at Colorado’s Columbine High School as well as Osceola High School in Wisconsin, where a traffic accident had claimed twin brothers a few weeks before Sept. 11. That column seemed to resonate with readers at the time, and to this day people occasionally will mention it to me. I have heard from a few people who say they saved that column, and they read it every day as Sept. 11 comes around. That is equally touching and humbling.

In the horrible wake of terrorist attacks on the World Trade Center and the Pentagon, all after-school activities were canceled Tuesday in the Jefferson County (Colo.) School District. This didn't surprise Ed Woytek, the athletic director at Columbine High School.

The day's events hit Columbine hard, especially the senior class. They were freshmen on April 20, 1999, when two students shot and killed 12 students and a teacher before taking their own lives.

"Our coaches and all of us are on kind of a fine line, especially with what happened here previously," Woytek said.

Columbine still is recovering from that day. Recovery also is an ongoing process in Osceola, Wis., where twin brothers Eric and Aaron Kipp, 18, died in a car accident on the way to football practice 30 days ago.

With thousands of innocent people presumed to have perished this week, what do you say? How do you heal? Maybe it's best to listen to the kids. That's among the lessons learned at Columbine and Osceola.

After the Kipp brothers died, football practices were stopped for a short period. But soon, everyone wanted to return -- or try to return -- to some sense of normalcy.

"Very soon, the kids were ready to go back," said Osceola coach/principal Mike McMartin. "They said, 'Coach, I need to keep busy.' And they were right. When we jumped back into it, although they weren't the best practices in the world, there was almost a big sigh of relief that they could start moving forward and take with us all the good things that the boys had shared with us for so many years, instead of thinking about the bad."

Activities went on as scheduled Tuesday in Osceola, the day of the attacks.

"We just really felt during that time it was massively important that we show to the kids, 'Hey, we're going on. We're not going to let these people defeat us or take us off our feet here. We're going to move forward and be proud,'" McMartin said.

The Columbine Rebels take a 1-1 record into tonight's game at Dakota Ridge. Osceola is 3-0 and the homecoming opponent for rival St. Croix Falls. The games go on, as do our lives.

So if sporting events are part of your normal routine, stick with it. If you haven't been to a high school game in years, tonight would be a wonderful time to go. Get away from the television, escape the headlines. Find a seat in the bleachers and take a break, however temporary, from all that's gone so wretchedly wrong in this world.

Watch the team captains shake hands before the coin flip. Hold your hand over your heart during the national anthem as the flag flutters at half-staff. Bow your head during the moment of silence to honor this week's victims. Get on your feet for the opening kickoff. Watch our young people -- players, cheerleaders, fans -- as they smile, holler and laugh together during this evening that is tradition both athletic and social. Buy popcorn, listen to the band, cheer first downs, simply celebrate.

Maybe administrators at every school can find a recording of God Bless America, and across our states -- Minnesota, Wisconsin, Colorado and beyond -- we'll sing together when the game ends. Just like a family. 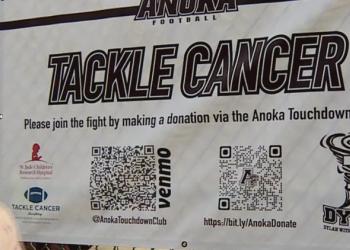 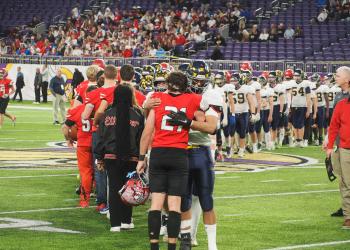 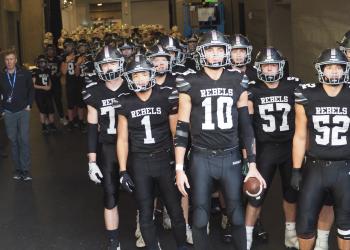 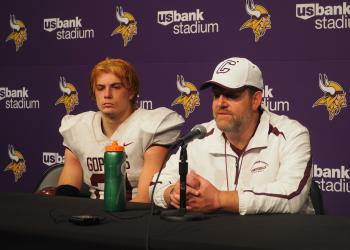