Sport Is A True Family Affair At Roseville High School

A family photo is affixed to the front of a refrigerator inside the Roseville High School gymnastics center. The family, three generations strong, is also the coaching staff for the Raiders.

The head coach is Maddie Pearson. Her assistant coaches are her mother, Emi Yokose and her stepgrandfather, Mark Curley. They may be the only three-generation varsity coaching staff in the state.

“It’s been a very memorable season,” said Maddie, 24, who is in her fourth season on the coaching staff and second as head coach. “It’s rewarding in so many ways. It’s a season of family.”

It’s indeed a gymnastics family. All three have extensive backgrounds in the sport, going back to 1980, Curley’s first year as a coach with the boys gymnastics team at Alexander Ramsey; that school closed when Roseville High School opened in 1987. He also coached at Coon Rapids and Columbia Heights and is now in his 40th year of coaching and 30th at Roseville. Five years ago he retired as the ninth-grade dean of students at Roseville, a position he held for 15 years. He stepped away from coaching four years ago before returning this season.

Yokose coached gymnastics for 15 years in the South Washington County school district and is an MSHSL official in the sport. She and Pearson both competed in the sport at Woodbury High School and have coached club gymnasts for years.

As this season approached, Maddie was in need of assistant coaches. While dining at a Davanni’s restaurant with Emi and Mark in September, she broached the subject.

Yokose said, “She knows that it's a very big passion of mine and she knew how much I missed it.”

By the time dinner wrapped up, Pearson had her coaching staff.

“They both have always been my inspiration,” Maddie said. “The coach I am today is because of them. It’s been fun for them to watch me grow as a coach. I see the same corrections they gave to me when I competed.”

The team is small, with nine athletes. There’s an upside in the coaching they receive at practice.

“We get to spend a lot of time with each individual athlete, which has really been a joy,” Curley said. “And these kids are great students, too.”

Jasmin Zenner, a senior who has been on the team since seventh grade, called Curley “a huge influence. I knew he was a good coach right from when I first met him. And then two years later I met Maddie. She stuck by us and fought for us, and last year she stepped up as head coach. She's doing an amazing job.”

Asked to describe the coaches, junior Naomi Kramer said, “They're awesome. Curley has so much experience and he brings so much helpfulness to gymnastics. And coach Emi is great, she's super supportive and cares so much about us and wants us to do our best. And Maddie is just one of the best head coaches, she has so much positivity and she loves us so much. It’s welcoming and fun.”

The team’s family aspect extends from the coaches to the athletes, and that’s intentional.

“Your home life and your family life need to be in order,” Curley said. “And then your school life needs to be in order. And if those things are in order, then you can do gymnastics. … I would be a hypocrite if I didn't say yes to this because that's what I've been preaching all these years.”

Yokose smiled and said, “It's been amazing. I am enjoying every moment. And as a proud mom, it's extra time with my adult daughter and that’s nothing to take for granted, that's for sure. It's been absolutely wonderful. I get to kind of stand back and watch her lead this team. And she just amazes me.”

“It’s kind of this whole new chapter,” Maddie said. “The girls are just loving it. We’re acting like a family. The parents are getting closer, too. It’s been so rewarding.” 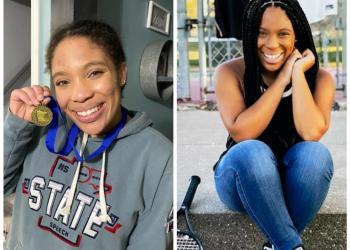