John’s Journal: A Warm Game On A Chilly Day 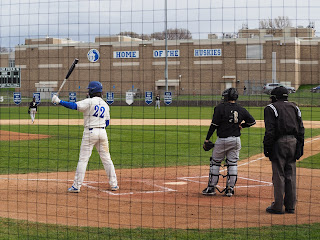 In normal times, 37 degrees and a light breeze in April would not be considered premium conditions for a baseball game. But these are definitely not normal times, so everyone was happy to be on hand late Monday afternoon when the Fridley Tigers and St. Anthony Village Huskies met at Palm Field in St. Anthony.

St. Anthony has lots of history, baseball and otherwise. The origins of the village -- which lies just to the north and east of northeast Minneapolis -- date to 1838. The baseball pedigree is newer, as evidenced by the banners hanging on the outfield fence; two of them mark Huskies baseball state championships in 2006 and 2008.

The ballpark, named after former St. Anthony Village coach and athletic director Gary Palm, is a true showplace. Most fans sit under covered seats behind home plate, with a few beyond right field, above a sign marking 315 feet, in seats known as Palm’s Porch.

The ballfield is tucked behind the school, along with a JV diamond, softball fields and the football stadium, which is currently home to beeping heavy equipment as preparations for artificial turf are in progress. Also being added is a track, which the Huskies have not previously had. 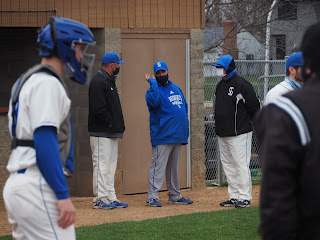 The athletic facilities are often crowded with fans, although Monday’s action didn’t fit that mold precisely. “On a nice night in May, it’s a hopping place,” said Huskies baseball coach/activities director Troy Urdahl.

The overarching theme these days in Minnesota can be described as happy, giddy, maybe even joyous, with the return of spring high school sports for the first time since 2019. The 2020 spring was, of course, wiped out because of Covid-19 fears, but things are back on track in 2021.

“It's just fantastic to be out here,” said Fridley baseball coach Dan Nalepka after the Tigers’ 6-0 victory. “It's 35 degrees outside, it's snowing but our kids are happy. We're running around having fun, and it's just so great to be out here. It's been two years.”

Even without the warmth of a late-spring evening, the atmosphere Monday was exceptional. Each hitter’s name was announced and the music between hitters and innings ranged from Neil Diamond to Elvis to Dropkick Murphys to AC/DC to Guns N’ Roses and beyond. There were friendly dogs on leashes, folks sitting in lawn chairs with hot tea at the ready, and the concession stand was open for business; three little boys made a run for hot dogs and returned to their seats behind home plate with aluminum-foil-covered delicacies in hand. A few crusty leaves were trapped in the fence, offering a reminder of last fall’s shortened high school seasons.

The familiar coach’s refrain of “Hustle out! Let’s go! On the hop!” came from Urdahl as the Huskies grabbed their gloves after a third out and returned to their defensive duties. It was glorious.

“I think we're a little more forgiving of pretty awful weather this April, because we're just happy to be back outside and having opportunities to play,” Urdahl said after the game, as his players tended to the field. 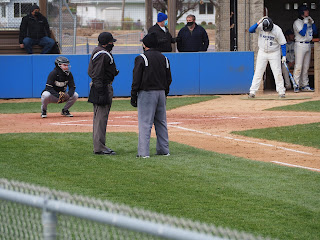 Fridley senior pitcher Micah Niewald, who gave up one hit and struck out seven over six innings, said, “It feels great, after missing last year. It was hard but now it feels good to be back and playing baseball.”

The return of baseball and other spring sports is a very positive sign in the fight with Covid-19. The return of students to in-person classes is another step in the best direction, along with other hoped-for spring traditions like proms and graduations.

“That's why this is nice, because they have an opportunity to have something a little more normal,” Urdahl said. “We're getting back into school and having a spring season.”