During Friday night’s football game between Cretin-Derham Hall and St. Thomas Academy at Twin Cities Orthopedics Performance Center, a receiver caught a pass in the left flat and had one tackler to beat in order to gain big yards.

As the receiver was brought down quickly by the lone defender, a man watching from the press box said, “You’ve gotta beat that guy.”

Michael Floyd knew what he was talking about, because he made a living by catching passes and beating tacklers. Floyd was a star at Cretin-Derham Hall, where he graduated in 2008, set Notre Dame records in several categories during his four years there, was a first-round NFL draft pick and played with Arizona, New England (earning a Super Bowl ring), Minnesota, New Orleans, Washington and Baltimore from 2012 to 2019.

Floyd, who teamed with 1994 Cretin-Derham Hall grad and former NFL player Matt Birk as honorary captains for the Raiders in Friday’s game, is back in his hometown filling a new football role: coach. Floyd is a first-year assistant wide receivers coach at NCAA Division II Concordia University in St. Paul. (Birk, left, and Floyd are pictured below.) 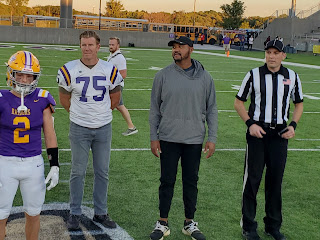 “It’s going well,” he said. “I like it a lot, being around the kids, helping them get better at their craft.”

Floyd, 31, is one of the top high school players in Minnesota history.  He was named Minnesota Player of the Year as a junior and senior by the Associated Press, as well as Gatorade Player of the Year for Minnesota in both years and a first-team All-American by USA Today after his 2007 senior season. As a senior, when he was named Mr. Football, he caught 59 passes for 1,247 yards and 17 touchdowns, along with 497 rushing yards on 43 carries.

Cretin-Derham Hall played in the Class 5A Prep Bowl when Floyd was a sophomore and senior, losing to Wayzata and Eden Prairie.

“Eden Prairie beat us pretty badly (50-21), but we played their team in basketball the following week,” he said with a laugh. “I think I missed about two shots and scored 38 points.”

Floyd, who also was on the Raiders track team, is a big fan of multi-sport athletes.

“I think it kept me in shape all the time, I was always active,” he said. “I wanted to compete and do great things for my school and my teammates.” 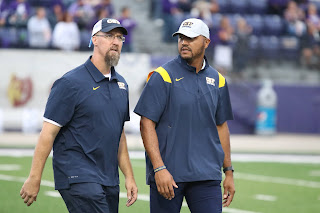 When his playing career ended, Floyd was reunited with Concordia strength and conditioning coach Eric Overland (pictured above with Floyd). Overland is a Waseca, Minnesota, native who had been on Notre Dame’s staff when Floyd was there. Floyd’s wife, Sydney, is a Concordia graduate.

“We sat down and caught up,” Overland said. “We hadn’t seen each other in a few years. He was contemplating his future, and as time went on I started encouraging him to consider the coaching route. He was a smart player.

“We chatted about it. I thought it could be a great opportunity to see if coaching would be for him.”

Overland talked to Concordia head coach Shannon Currier about the possibility of bringing Floyd on. They met Floyd and Sydney at The Nook, a famous burger joint across the street from Cretin-Derham Hall in St. Paul.

Floyd, who is three games into his coaching career, initially majored in business at Notre Dame but finished with a degree in sociology. “I could never see myself in a cubicle,” he said. “I have to be around people.”

Now he’s around young football players all the time.

“What’s cool about it is, you talk about things in a classroom and then you see it happen on the field. That tells me they’re listening,” he said. “It’s a big difference from high school to these kids, who are a little more mature. You can see you’re doing something positive.”

He and Sydney have two children, eight-year-old Cienna and 18-month-old Michael Jr. Floyd stays busy with family, coaching and works in commercial and resident real estate.

“I sit down and watch film at 5:30 a.m. before my wife and kids get up,” he said. “I come to meetings and express my thoughts. Everyone has to be on the same page, just like at any other level.”

The Concordia players don’t always have a firm grasp of Floyd’s high school career, but they know all about his NFL years. 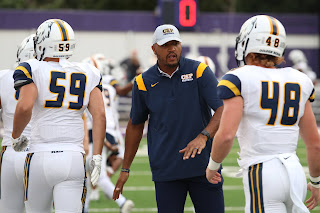 “They ask who I played with, how such and such was as a teammate,” he said. “Mostly they ask about the Tom Bradys, the Fitzes (fellow Twin Cities native Larry Fitzgerald Jr.). I say they’re different in many ways but there’s a reason why they stuck around so long. They take care of their body, they do the right things each and every day.”

Currier, a native of Cosmos, Minnesota, was the head coach at Truman State in Missouri when Floyd was in high school. He’s heard the stories of Floyd’s high school accomplishments and he’s happy to have him on the coaching staff.

“He came to some workouts with our freshmen, and Coach O helped set the stage for him to become a coach,” Currier said. “Mike has a good heart and he wants to give back to kids. Coach O said we should reach out to Mike and I said I’d love to get him involved.

“Michael comes to all our practices and games and obviously brings a lot of credibility. He’s very humble despite all the success he’s had.”

The Concordia Bears will take a 1-2 record into a game at noon Saturday against Southwest State at Concordia’s Sea Foam Stadium. (There is one Cretin-Derham Hall grad on the Concordia roster, freshman offensive lineman Ethan Sigler.)

“For me, being able to play Division I and professional football, I think I see some things differently,” Floyd said. “I can contribute that to the players and also give some advice to the coaches side. They have been doing it for a while but they still look at me and ask for my thoughts on things, too.”

Floyd’s best friends remain his high school teammates. He and several others converse every day via group texts. He wants today’s high school athletes to forge similar relationships and create memories with their friends.

“I would definitely say do as much as you can and don’t try to specialize in one sport,” he said. “Every single season, try to get into something and stay active. You don’t get these years back and it’s a fun four years.”